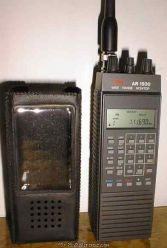 The AOR AR-1500 receiver continuously covers 500 kHz to 1300 MHz. Modes include: NFM, WFM, AM and SSB. The AR-1500 is the world's first true hand-held wide range receiver offering SSB as standard feature. Coverage is from 500 kHz all the way to 1300 MHz without any gaps. Channel steps are programmable in multiples of 5 kHz and 12.5 kHz up to 995 kHz, the BFO will allow tuning between these steps for SSB operation. All popular modes are provided NFM, WFM, AM and SSB (USB, LSB & CW) with the BFO switched on. A rotary tuning control is fitted to the top panel to further increase operating pleasure, convenience and versatility.

There are 1000 memories arranged in ten banks of 100 channels. 100 of these memories are reserved for 'auto memory' in bank 9. The scan rate is 20 channels per second.

There are three versions of the AR-1500 known at this time. The original AR-1500 was released and available in Japan, the UK, and Europe in mid 1992 and was known simply as the AR-1500. A later revision to this scanner appeared in late 1992, called the AR-1500E. This model differs from the earlier model by including a cascade filter at 58.075 MHz IF to improve selectivity, a DC input protection diode to guard against reverse polarity connection, additional buffering in the microprocessor to protect against software crashes when scanning an empty bank, and a reset switch in the battery compartment.
A new revision, called the AR-1500EX, will be available on Feb. 9, 1993 only in the UK. It contains a substantial redesign of the PC boards and logic circuits. The RF board has been completely redone. In addition, the BNC connector has been reinforced. The unit is supposed to have better selectivity and better handling of strong signals.

Estimating the value of a rig can be challenging. We collect prices paid by real hams over the years to help you estimate the value of a used AOR AR-1500. Just bought or sold this model? Let us know what you traded it for and help other ham operators!

Based on historic data, today's second-hand price of the AOR AR-1500 is around: