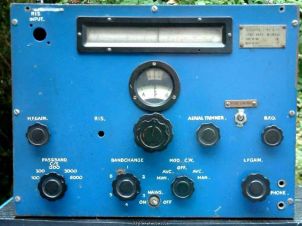 According the manual, there are a number of variants to this venerable old set. The initial prototype was designated CR100. This was followed by variants designated CR100/1 through CR100/8. None of the CR100's were ever fitted with S-meters as standard.

The CR100/2 was also called the R.A.F. type R1297 receiver, as it was issued to the Royal Air Force and the other services, except the Navy.

The CR100/4 had an R.I.S. (Radar Interference Suppressor) control on the upper left corner, to adjust a blanking circuit in the receiver to the repetition rate of the radar on the ship to prevent pulse interference. Most Model 4's were painted blue with white lettering.

The CR100/1, /4, /5, /6, /7 and /8 were also called the Admiralty Model B28 receivers. Admiralty Pattern B28 was the standard MF/HF receiver on the Royal Navy and Royal Canadian Navy ships in World War II. After the war, they were phased out and usually replaced with the Murphy B40 receivers in the Royal Navy and Royal Australian Navy. However, in the Royal Canadian Navy, from around, 1943 they were phased out and replaced by the Canadian-built Marconi CSR5 receiver.

The receivers are excellent performers considering the state of technology in the late 30's to 40's.

No documents available for this particular model.
Upload relevant documents

Estimating the value of a rig can be challenging. We collect prices paid by real hams over the years to help you estimate the value of a used Marconi CR100 1/8. Just bought or sold this model? Let us know what you traded it for and help other ham operators!