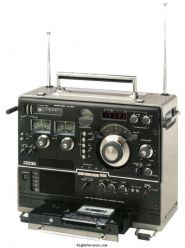 Find the Sony CRF-330K on Amazon

The Sony CRF-330K is a double conversion, quartz synthesized digital receiver. It covers 150-30000 kHz to include longwave, medium wave and all shortwave frequencies. It also receives the FM band. It features ergonomic controls.

No documents available for this particular model.
Upload relevant documents

Estimating the value of a rig can be challenging. We collect prices paid by real hams over the years to help you estimate the value of a used Sony CRF-330K. Just bought or sold this model? Let us know what you traded it for and help other ham operators!

Based on historic data, today's second-hand price of the Sony CRF-330K is around: